The very last part of the colon, before reaching the rectum, is in an “S” shape and called the sigmoid colon. By the time stool gets to this part of the colon, most nutrients have been absorbed back into the bloodstream. Because the stool contains products of putrefaction at this point, there exists a special circulatory system between the sigmoid colon and the liver. There is a direct communication of veins called the enterohepatic circulation. Have you ever felt sick just before having a bowel movement, when stool material has just moved into the rectum for elimination? As soon as the material is evacuated, you no longer feel sick. This is due of the toxic quality of the material and the enterohepatic circulation coming into play. Because of this, it is important to evacuate when you have the urge. The rectum should usually be empty.

With a coffee enema, this is for specifically cleansing the liver. The liver is a major detoxification organ in that it processes and neutralizes all toxic chemicals, whether they come from our own body or the environment.

In essence, the coffee enema stimulates the flow off bile and increases the enzymatic action of the liver.  Bile is formed by the liver – it is then stored in the gallbladder.  Bile is then secreted into the intestines via bile ducts, carrying waste for transit from the body.  Coffee enemas stimulate the opening of these bile ducts.

Caffeine and palmitates (chemicals in coffee) work synergistically to stimulate and cleanse the liver and blood. Without entering the digestive tract the caffeine is absorbed through the bowel wall, via blood vessels, and makes its way directly to the liver.

The caffeine exposure causes the liver’s portal veins and the bile ducts to expand which increases the release of diluted toxic bile. The enema fluid triggers peristalsis (intestinal muscle contractions) and the efficient removal of wastes from the body.

Palmitates in the coffee stimulate and increase the production of a liver enzyme called glutathione-S-transferase (GST), which removes free radicals and toxic cells from the bloodstream and facilitates detoxification of the liver. As a result of the enema the liver becomes less congested with debris, which makes room for the filtering process of yet more bodily toxins. Palmitates in coffee increase the production of GST by 700 times. These powerful free-radical-quenching enzymes assist your liver to more effectively detoxify your entire body.

Ideally, the coffee enema should be retained for twelve to fifteen minutes during which time the body’s blood supply circulates and passes through the liver approximately five times (every three minutes). Since the blood serum is detoxified as it flows through the caffeinated liver, the enema is essentially a form of blood dialysis (filtering) across the colon wall. Drinking coffee has no such therapeutic benefits, but when you take it rectally the caffeine stimulates certain nerves that immediately cause the liver to release its toxins. 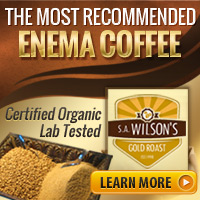